General Dynamics have recently purchased an Aquablast 915 wet abrasive blasting cabinet from Vixen, for the surface treatment of military parts.

General Dynamics, based in Alabama, USA, is a market leader in the manufacturing of combat vehicles weapon systems, marine systems and business aviation. The company uses Vixen’s Aquablast cabinet to finish parts of machinery that are used in the military, including parts of aero plane wings and actuators. These parts, along with others, are made from a range of metals such as aluminum, stainless steel and titanium, and it is important for them to look impressive.

Manually operated, the Aquablast 915 machine is particularly effective for creating a satin finish on metals and removing small burrs from manufactured components. The Aquablast range is designed to simultaneously blast and degrease components in a quick and easy dust-free process, which achieves outstanding finishing results on a variety of components.

General Dynamics use their Aquablast in the last stages of the production process to deburr the components and remove and unwanted edges and ridges created during manufacturing.

The aid to vapor blasting process, staff at General Dynamics add a 120 grit Silicone Carbide blast media to the application which is very effective at deburring parts to create a cosmetic finish, which looks impressive to the eye.

Before purchasing their Vixen Aquablast, General Dynamics used another vapor blasting machine manufactured by a different company. The new Aquablast now means that the finishing process is up to 50 per cent quicker than with the company’s old machine, meaning that production times have been reduced significantly. 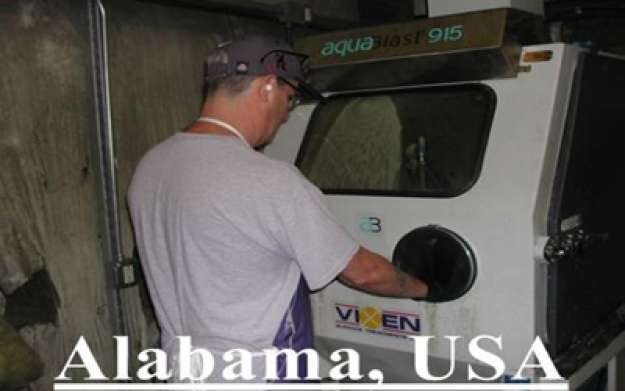 “Our previous machine was old and run down, meaning the finish was far from superior. We were spending lots of money on repairing our old machine, until we decided to invest in the Aquablast 915, and we are immensely happy with our new results.

Our new Aquablast doesn’t tumble the parts that we need finishing – meaning that they are not damaged in any way. As well as performing fantastically, the machine looks great too. It’s far more modern and advanced than anything we have used before.”